Greetings, WYMOP readers!I have two things to mention this week: a little fun, and then a little business.
First, the fun:
*********
I was having a good day, and I was grocery shopping.
If you’ve ever been grocery shopping with me when I was having a good day, you probably understand what that means, but for the less shopped-with, I’ll elaborate: there was singing and whistling along with the music from the overhead speakers, plus the occasional surreptitious dance move when I thought no one was looking.
Yeah, I’m one of those guys.
I’d whistled my way through check-out (yes, the people around me were most likely wishing death upon me, or maybe an aneurysm, or at least that one of my goddamn lips would fall off), told my cashier to have a good day, told my bagger to have a good day, told the grumpy-looking woman who blocked my exit for a couple of minutes while she reorganized her coupons to be ready for next week’s shopping trip to have a good day (I think she was one of the lip-falling-off-wish people), and was strolling out to my car behind a half-loaded shopping cart. I’d consciously decided to stroll, rather than get a running start and jump on the back of the cart, riding it across the lot yelling “Weeeee!” and making vroom-vroom race car noises; it was a fine, sunny day, and I wasn’t in a rush, and besides, there was a big old car coasting down the aisle toward me.
The big old car stopped, and its directional started flashing. I saw a little old woman behind the wheel of the big old car—she was more than mere knuckles on the steering wheel, but not by much—and noticed she was waiting to turn into one of the three vacant spots to the left of my car. I wouldn’t have been in her way even if I were loading up my trunk at the time, but she had no way of knowing that, and she was being nice enough to wait for me to pass (unlike the sour-faced coupon woman). I pulled my cart to a halt and waved her on, letting the sweet little lady get on with taking her space and getting in the store.
Now we enter a very subjective part of my day, a sort of slowtime, where one second seems like ten, and ten seconds can last forever. Fans of The Matrix know what I’m talking about—if someone had fired a gun at me right then, I’d have had plenty of time to watch the bullet soar slowly past because my mind was cranking along at roughly the speed of light on crack.
All in the space of an actual second, though it seemed more like a minute, I noticed four things.
“Oh, Christ!”
That was as far as I got, because I burst into a case of fear-sweat so profound it sucked all the spit from my tongue as fuel. “No!” I rasped, but no real sound came out, and because of the slowtime effect, it seemed to come out as a wheezy “Noooooooooooooooooooooooooooooooo . . .”
I watched, frozen, as the monstrous machine swung closer . . . closer . . . and the bumper of my little car passed right through the void left by the howitzer attack, actually passing into, and then out of, the enemy car.
If I hadn’t already fear-sweated myself into a state of extreme dehydration, I might have wet my pants. She exited her car and tottered past on her way into the store, and I returned her friendly wave with a short chop of my own shaky hand. I filled up my trunk and drove home in silence; even hours later, when I tried to whistle along with a song my son played on his sound system, I lacked the saliva to produce a single note.
Damn those lip-falling-off-wish people. Those curses work.
***************
That was the fun part; now on to a little  bit of business . . . which is also fun. 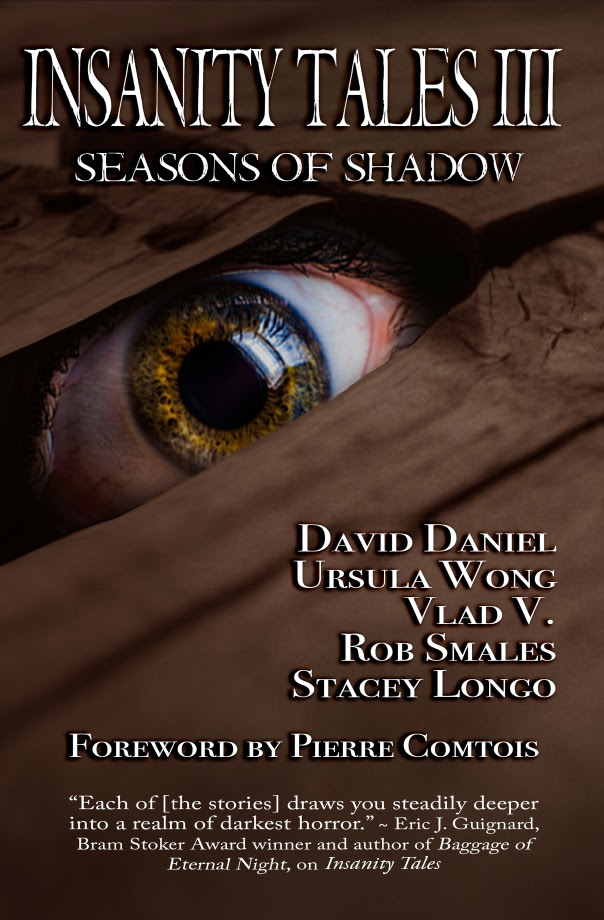 I’m all kinds of happy to announce The Storyside (the writers’ collaborative I belong to) has a new anthology coming out tomorrow, June 6, 2017. It’s called Insanity Tales III: Seasons of Shadow, and if you read my Writer in Progress post two weeks ago, you know I have a couple of stories in there. “A Bee,” and “Tracks in the Snow.”


What you may not know (because I have yet to mention it anywhere) is that my two favorite stories in this book aren’t my own, and that may tell you something about the terrific stories in this book. My favorite stories in Insanity Tales III—and it was a two-way tie for favorite—are “Eat Your Vegetables,” by Stacey Longo, and “Over the Gulfs of Dream,” by David Daniel. If you like dark fiction that hangs around on the suspenseful side of things, give Insanity Tales a look-see. You won’t be disappointed.

I'll talk to you later!