So. Being the caretaker of a 12-year old boy is . . . interesting. A study in contrasts. The good and the bad. I’ll try to explain.

You might have noticed I said “caretaker” up there, not “parent”, or “father.” I’m proud to be a father, and tell people all the time. I do—if you know me, back me up here: I’ve probably told you at least one story about my kid. Probably more. They were probably funny: he’s a funny kid, and I have a terrific sense of humor.

No, I didn’t say “caretaker” for any other reason than that’s what it’s like sometimes: being a caretaker at a very small zoo. Just one exhibit. There’s a room in the house that smells a little bit like an animal den, though the dogs themselves are not allowed inside. It’s kind of steamy, with a sort of rain forest atmosphere, and it’s always dark in there. If you look closely you can spot a structure we refer to as a bed, though in reality it’s more nest-like than anything else, cast-off clothes and blankets forming a warm, comfy pile that can be either lain upon or burrowed under, depending on the weather and season.

The creature (we call him Handsome, for anyone who may have forgotten), is roughly man shaped, and sized—in fact, we can now share clothes, which will make it pretty easy to Christmas shop this year. I’ve already picked out a number of shirts that will look good on me—I mean, that look like they’ll fit him. But I digress. The beast seems to communicate in almost nothing but grunts and a sort of muttering, though when provoked can roar a variety of phrases at surprising volume. There’s “In a minute!” and “In a minute!” and, when he’s really provoked, there’s “In a minute!”

Yesterday I managed to pry the Handsome from his lair with promises of food and a well-placed cattle-prod. He emerged from his hole grumpy, glaring about, blinking in the unaccustomed daylight. I had the Handsome help me with a task or two I had about the house, but it was a constant battle. The Handsome does not take well to harness, and the phrase stubborn as a mule comes to mind. Eventually, I lost track of the Handsome, and he slipped away from me.

I found him back in his lair, where I stood in the doorway and tried to call them out again. I saw nothing but his silhouette against the computer screen, a head misshapen by oversize headphones, the phones clinging to his ears like long-lost friends. I could hear the video he was watching, or the game he was playing, right through the phones, so I raised my voice, shouting my call.

The call was answered immediately with a roar of “In a minute,” the sound of a young male defending what he sees as his territory; I’d get no more work from the beast today. With a sigh, I shut the enclosure door and went about my business.

Hours later, I finished my projects, and decided to hit the shower before it was time to go. It was dark outside now, and there hadn’t been a peep out of the boy’s room. The house lights were on, and I was tired, so I stepped into the shower. And then I stepped out. I opened the bathroom door, clad in my fresh clothes—and stopped dead when I saw the darkened house before me.

What had happened to all the lights? Was there a power outage? No, there couldn’t be—the lights in the bathroom were still on, and had not flickered, so . . . I poked my head around the corner, calling a quiet “Hello” into the darkness, in good not-going-to-survive-the-horror-movie fashion—and saw a light off in the dining room. It was faint, and small, and seemed to be flickering. 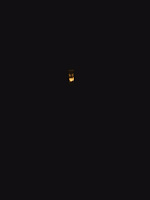 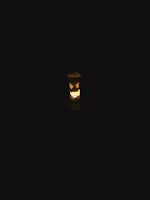 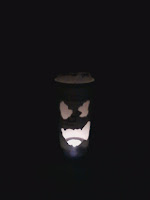 What was this? A tiny, flickering face in the dark? I peered more closely, noticing for the first time that there was a piece of paper in front of the face—there was writing on it, though I could barely make out the presence of the letters in the dim, unsteady light spilling from the tiny head in front of me.

So I turned on the lights. 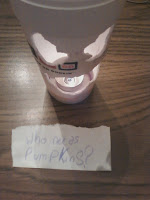 It was a jack-o-lantern made from an extra-large Dunkin Donuts hot chocolate cup, a worn tea light candle, scooped from the holder on the stove, nestled down within it to give it life. While I had been in the shower, the Handsome had carved this thing for me, found the smallest of candles to put within it, then run about the house dousing all the lights to give his creation its full power. In front of the thing he’d left me a note:

Yeah, sometimes having a 12-year old boy is a lot like keeping a small and very private zoo. But lots of times, and this was one of them, I just love being a dad.

—Talk to you later!


I know (even if you don't) that I've been gone for a while. I've been doing things—writerly things—but it's all been the kind of behind-the-scenes stuff that no one much cares to read about. I took a course in editing, and then gave that a shot for a while. I edited a book

titled Demonic Visions: 50 Horror Tales, Book 5, and, let me tell you, choosing for your very first editing job to edit for fifty people . . . yeah, it's as idiotic as it sounds. If I'd had hair, I'd have been pulling it out by the roots. But I met a lot of people, and I learned from all of them. Hopefully, I helped them all put out a good book—but this is all beside the point.

Since I stopped writing While You’re Making Other Plans, a whole lot has happened. The book I wrote was pulled off the shelves and is no longer for sale—by my own request. My son, Handsome, has grown so large we can wear each other’s clothes, and he’s only twelve. I’ve joined a writing collaborative, and we plan to put out some great books together. I started writing monster movie reviews for Cinema Knife Fight. I’ve recently signed a contract for a short story collection, due to come out early next year. My day job is changing so fast I can barely keep up. There’s been exciting stuff happening—well, exciting for me, your mileage may vary—and I’ve thought along the way about sharing it with all of you, but could never figure out just how to come back.

I wrote a few special pieces, kind of trumpeting my way back into the blogging world, but none of them seemed right. I’m not very good at promoting myself, though my friends take a softer view: they tell me I suck at it. I wasn’t comfortable with any of those “special” pieces, because I don’t feel very special. I’m just me. So I set them aside and decided to try again. And again. But it never seemed to come out right.

I’m back, plain and simple.

I’ll be trying to post stuff here once a week—and if I fall behind, please feel free to call me on it. A quick comment of “Dude, where are you?” left either here or on my writer page on Facebook (https://www.facebook.com/Robert.T.Smales — look, a handy link!) should get me off my ass. I’ve noticed a lot of bloggers out there post their weekly stuff on Friday, sort of to kick off the weekend, but I’m going to do things a little differently: I’m going to post on Monday. Way too much of the fun stuff in my life happens on the weekend—I don’t want to wait a week to write some of it down. I was forgetful at twenty-six. At forty-six, I’m lucky I remember to take my ass with me when I get up in the morning, and I don’t want to miss the good stuff. Just this weekend, for instance, I:

So, starting next week I’ll be spicing up Mondays with something here at WYMOP. Sorry, Monday, but you need the spicing up. You suck, and I think you know it. So next week I’ll be here, trying to be funny for y’all. Sorry about this week, but this was just to get me started. I needed a little boost to tell you I’m back.