Greetings, WYMOP readers!
Ever have a craving? I did. I was driving around this afternoon running a couple of errands, doing a little food shopping, and it was while I was at the grocery store, surrounded by shelves of food, that the craving hit. But was it for anything I’d find on those shelves? Of course not!
Have you ever heard of Brothers Deli? If you live around here you have. Family-run establishments, incredible home-style food, and portions large enough to make an NFL linebacker look at the plate and say Damn! You want me to eat all that? What I was craving was their chicken pie. Brothers’ chicken pie with mashed potatoes and corn, the whole thing slathered with gravy. Would it be a lot of food? Yes. Did I plan to eat the whole thing? Hell yes!
So on my way back to the house, I stopped in at Brothers in Danvers, got in line, glanced up at the menu board—and froze.
Yankee Pot Roast.
It was right there on the board, and it looked so good. I mean, the words were right there, and the image they conjured in my mind looked fabulous. I’d had it before, of course, and it sure gave the chicken pie a run for its money. It was so good, if I hadn’t come there specifically for the chicken pie, I might have been tempted to get the pot roast. But there was the chicken pie, higher up on the board, and . . . and . . .
And I was tempted to get the pot roast instead. Dammit!
No, I’d come there for the chicken pie, and I’d stick to my guns . . . just like that delicious pot roast would stick to my ribs if I’d change my mind. Just change my mind a little. Because it wasn’t like Brothers was out of my way or anything; there was nothing stopping me from coming back tomorrow to get the chicken pie. Of course, there was nothing stopping me from coming back tomorrow and getting the pot roast either.
No, no, I’d come there specifically to get the pot roast, so if I was going to—no, wait, I meant the chicken pie. Right? The pot roast was my second choice, so if I just went with my gut and got the Yankee Chicken Pot Pie Roast I could come back for . . . no, wait a minute—
“Next!”
Shit. 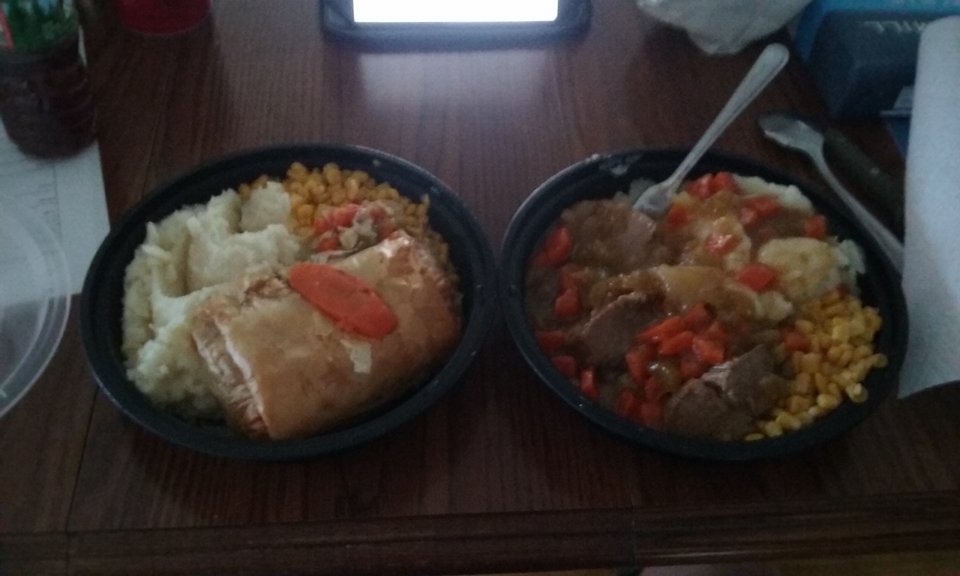 Yup, that’s right. I got both. But not to worry, there’s no way I could eat both. Not in the same sitting. I brought these bad boys in and sat them down, just as you see here. I looked them over carefully. I smelled them, felt the weight of them, and pondered. Then, showing an inner strength I’d not exhibited at the restaurant, I slapped the cover back on the chicken pie (shown in all its chickeny deliciousness on the left) and went with the pot roast (depicted in all its carroty-corny-beefy glory on the right), saving the wonders of the chicken pie for tomorrow. I manfully pushed the closed container aside, digging into the pot roast with gusto (translation: with a big pile of napkins at hand, for I am sometimes a slob) while calling up the document I was currently editing on my tablet.
I worked and ate, masticated and cogitated, dined and edited . . . and then the pot roast was gone.
I had a sad.
I pushed the empty plate to the side, opposite the full, weighty, fantastic-smelling chicken pie. With the perfect, poultry-filled pastry on my left, and the once glorious plate of now empty sadness to my right, I pulled the tablet closer in the middle and got back to work on that chicken pie. Excuse me, on the document. My inner strength had failed me while standing in line, under pressure to make a decision, but it had made a serious comeback when I’d pushed that covered plate to my left, and it wasn’t going to fail me now.
I focused on the task at hand, working on the document, scrolling almost non-stop all the way to the end.
. . .Then I scrolled back to where I’d started when I realized I’d not read a word, so busy had I been not thinking about the chicken p—
No! No, I wouldn’t even think the name. I’d just scroll more slowly this time, focusing hard on the words on the tablet. I leaned closer—so close nothing existed for me for a time but the small screen that had become my world, my everything, my . . . my . . . hey, was it just me, or did my tablet smell like chicken pie?
“Dammit!”
Perhaps I should move the pie away from me? Put it in the fridge, where I could no longer see or smell it? But no, that would be admitting weakness. What about my vaunted inner strength? What about my vow that it wouldn’t fail me again, as it had in Brothers? That wonderful scent wouldn’t be enough to break my will. Hell, with my strength of character, the sight of the thing wouldn’t be enough to weaken me!
To prove my point, I pulled the chicken pie over in front of me and tore off the lid. See? I thought. Oh, sure, it looks fantastic, and I know it tastes out of this world, but just the sight of it isn’t enough to make me weaken, is it? Of course not! Although . . . with the lid off like this I can really smell it now . . . and it’s, like, right in my face. Wow, I guess it’s a good thing I hadn’t put any utensils with the pie. Of course, my pot roast dish is right there . . . and there’s a spoon . . . 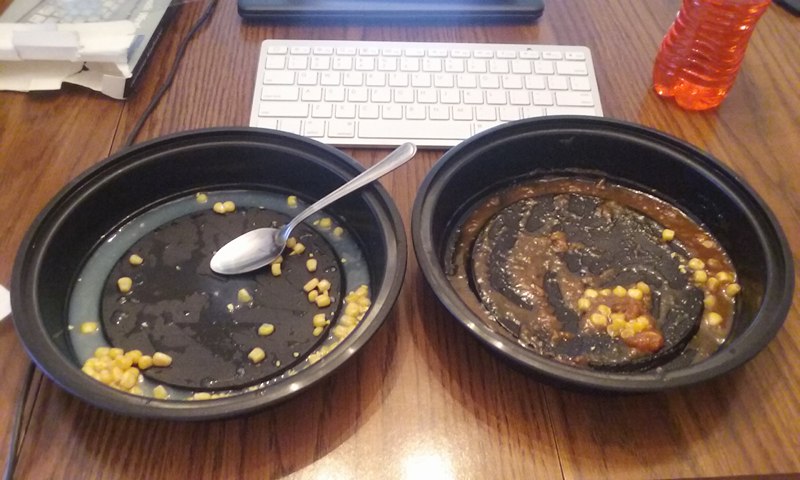 Shit.
Well, if my inner strength isn’t all it’s cracked up to be, at least I know it’s not weak from hunger, right?
Incidentally, this blog post has turned into a request for aid. I’m currently trapped at the table, unable to move. I’ve tried calling out for help, but I’m so goddamned stuffed I can’t draw a full breath, and the only noise I can make is a wheezy sort of moan that sounds just a touch like Stephen Hawking being kicked in the nuts. If there’s anyone with a tow truck, or a winch, or, hell, even just a strong back, who could drag my incredibly overfull ass off to the bathroom before things get desperate, I sure would appreciate it.